It’s going to a short week this week! We’ve just had a public holiday here in the UK and for the next four days global HQ will be infested with a herd of ravenous deranged halflings. On this plus side, this probably means I’ll be playing more Pathfinder than normal, but it means I’ll get less Raging Swan stuff done.

In any event, Raging Swan Press is releasing the first in a new, but occasional line: Town Backdrop: Wolverton. Wolverton is the last settlement of the Lonely Coast not detailed and now we’ve rectified that problem. The town’s design also means it should be easy to insert into almost any GM’s campaign. 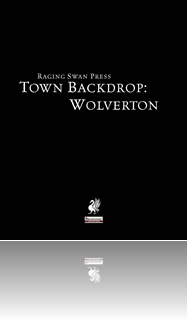 On the work front, I’ll mainly be slaving away on my second edits of the new material for GM’s Miscellany: Dungeon Dressing. (I’ll be creating a web page for this titanic book next week!)

I also have to submit GM’s Miscellany: Urban Dressing to the printer.

Finally, I’m planning to slave away over my blog. My plans to move my blog over to WordPress are preceding extremely well and I hope to be able to announce my move later in the week (or possibly early next week).  Before that, though, I want to migrate a decent proportion of my Borderland of Adventure session summaries and advice articles over to the new site.

That’s it! Have a great week everyone!